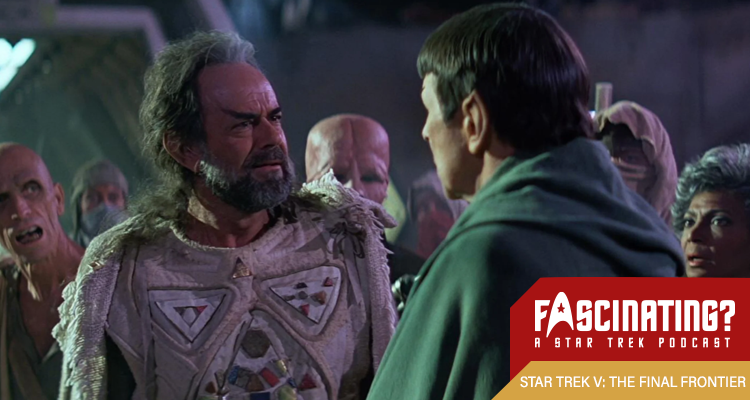 Star Trek V: The Final Frontier was the fifth big-screen adventure for the Star Trek crew, with Spock’s secret half-brother leading his cultists on a mission to find God. In this episode Gerry and Iain discuss the difference between the family you’re born with and the family you choose.


When a mysterious Vulcan cultist takes hostages on a planet in the Neutral Zone managed jointly by the Klingons, Federation and Romulans, Kirk and the Enterprise-A crew are recalled from shore leave and sent to resolve the situation before it escalates further.


The Vulcan turns out to be Spock’s long-lost half brother Sybok (Laurence Luckinbill) on a mission to reach the centre of the galaxy, where he believes he will find God. Meanwhile a Klingon vessel is in pursuit, setting up a convergence beyond the Great Barrier.


Star Trek V: The Voyage Home was directed by William Shatner, his only directorial contribution to the show. The story was by Harve Bennett, William Shatner and David Loughery and Loughery is credited for the screenplay.


Star Trek V: The Final Frontier was released in 1989. It is 1 hour and 47 minutes long. It can be viewed on Paramount+ in the United States and is available on DVD and Blu Ray in other countries.