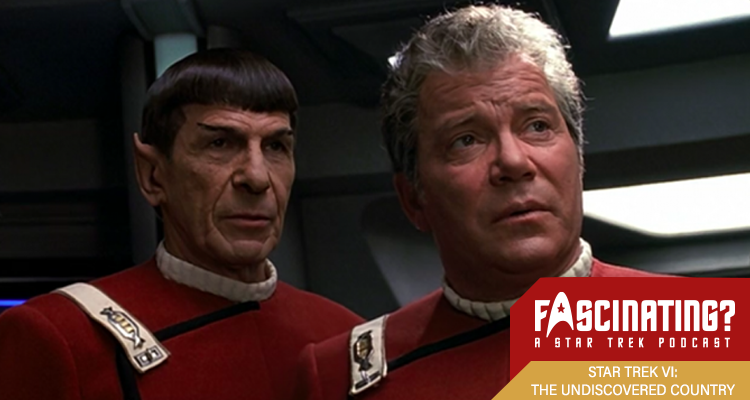 Star Trek VI: The Undiscovered Country was the sixth and final big-screen adventure for the Star Trek crew, with peace talks between the Klingons and the Federation threatened by a high profile assassination. In this episode Gerry and Iain discuss whether peace is possible without trust.


A sceptical Kirk and the crew of the Enterprise are tasked with escorting the Klingon chancellor Gorkon (David Warner) to high level peace talks. After a tense dinner, things escalate quickly when the Klingon ship appears to be attacked by torpedoes fired by the Enterprise.


General Chang (Christopher Plummer) demands revenge and Kirk surrenders immediately. He and McCoy try to save Gorkon, but cannot and are arrested. Facing trial on the Klingon homeworld, the two men must rely on Spock to solve the case and set them free.


Star Trek VI: The Undiscovered Country was directed by Nicholas Meyer, who had previously directed The Wrath of Khan. The story was by Leonard Nimoy with additional credits given to Lawrence Konner and Mark Rosenthal. Screenplay credits were given to Meyer and Denny Martin Flinn, his only work for the show.


In this episode Gerry and Iain considered whether all good things must come to an end.


Star Trek VI: The Undiscovered Country was released in 1991. It is 1 hour and 50 minutes long. It can be viewed on Paramount+ in the United States and is available on DVD and Blu Ray in other countries.