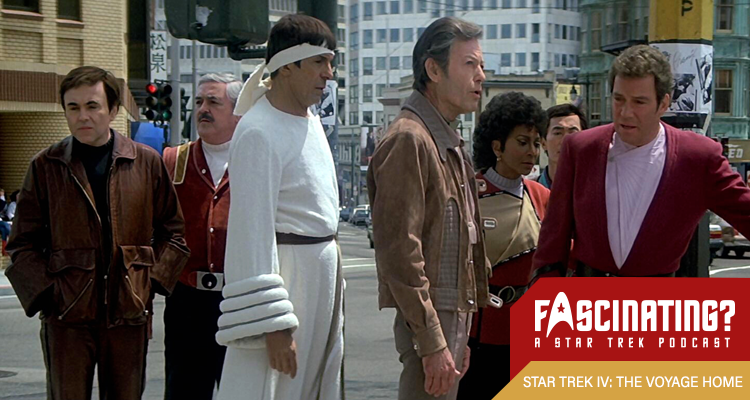 Star Trek IV: The Voyage Home was the fourth big-screen adventure for the Star Trek crew, with the group forced to travel back in time to the 1980s to recover a pair of humpback whales. In this episode Gerry and Iain discuss defunct donut chains and timeless landmarks.


With Spock’s memory and skills largely restored, the Enterprise crew head back to Earth on the Klingon Bird of Prey they hijacked in the previous movie. Meanwhile a probe playing whalesong advances on Earth, threatening to end all life as cataclysmic weather ensues.


Travelling back in time 300 years, Kirk and co. seek to acquire two humpback whales, extinct in their time, to respond to the probe and end it’s assault. There they meet Dr Gillian Taylor (Catherine Hicks) and her friends, George & Gracie.


Star Trek IV: The Voyage Home was directed by Leonard Nimoy, just as the previous film had been. The screenplay and story were by Harve Bennett and Nicholas Meyer.


In this episode Gerry and Iain considered whether a triple dumbass could theoretically exist.


Star Trek IV: The Voyage Home was released in 1986. It is 2 hours and 2 minutes long. It can be viewed on Paramount+ in the United States and is available on DVD and Blu Ray in other countries.