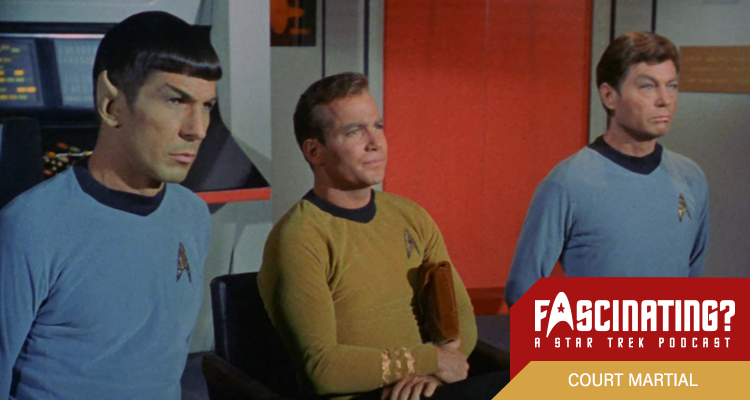 Court Martial was the twentieth episode of Star Trek’s debut season to air, with Kirk under suspicion and his own ship providing the most damning evidence. In this episode Gerry and Iain discuss legal representation and the importance of court procedures.


After losing a crew member in an ion storm, Kirk must report to the nearest starbase and give his report of the event to Commodore Stone (Percy Rodrigues). When computer records suggest his account is false, a full court martial is convened.


Fortuitously, or not (depending on your perspective), the chief prosecuting officer for the case is an old flame of Kirk’s, Lt. Areel Shaw (Joan Marshall). Kirk’s legal counsel is Samuel Cogley (Elisha Cook Jr.), a veteran litigator with an affection for physical books. A dramatic late twist reveals the survival of Lt Finney (Richard Webb), the supposed victim and Kirk’s former friend, who’s daughter Jame (Alice Rawlings) is named for the captain.


Court Martial was directed by Marc Daniels, one more of his fourteen Star Trek episodes. The initial writer was Don Mankiewicz with the final version credited to Steven W. Carabatsos.


In this episode Gerry and Iain considered the rules of evidence and the right to a fair trial organised under known rules.


Court Martial was released in 1967. It is 50 minutes long and originally aired on the NBC network. It can be viewed on CBS All Access in the United states, Netflix in the UK and is available on DVD and Blu Ray in other countries, including a comprehensive remastered set of all three seasons released by Paramount Home Entertainment.