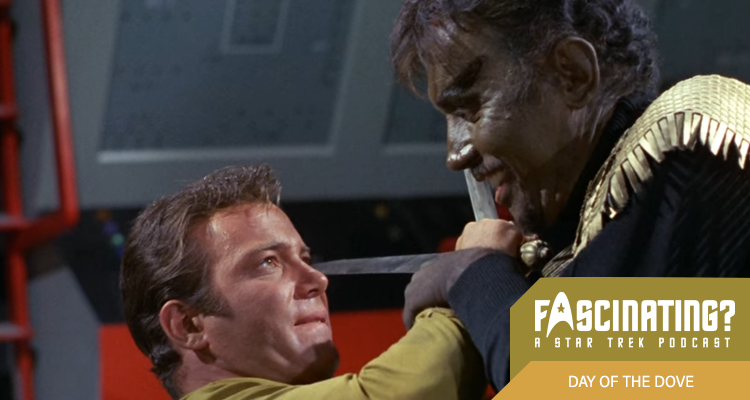 Day of the Dove was the seventh episode of Star Trek’s third season to air, with an alien being pushing the Enterprise into conflict with a Klingon crew for its own benefit. In this episode Gerry and Iain discuss the persistance of racial hatred.


Drawn to the same planet by false distress calls, Kirk and his Klingon rival Kang (Michael Ansara) commence a bloody engagement under the manipulation of a sentient but non-corporeal life form.


After the Klingon ship is destroyed, Kang and 37 of his crewmen – including his wife-cum-science-officer Mara (Susan Howard) – plot to take control of the Enterprise and take revenge for the 400 men whose deaths he blames on Kirk. Meanwhile, the captain and Spock race against time to find the cause of their uncharacteristic behaviour.


Day of the Dove was directed by Marvin Chomsky, the second of his three episodes in the chair. The writer was Jerome Bixby, the third of his four for the show.


Day of the Dove was released in 1968. It is 50 minutes long and originally aired on the NBC network. It can be viewed on Paramount+ in the United states, Netflix in the UK and is available on DVD and Blu Ray in other countries, including a comprehensive remastered set of all three seasons released by Paramount Home Entertainment.