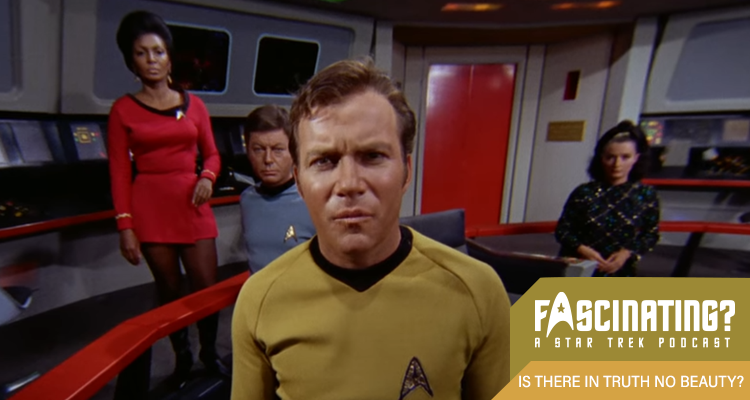 Is There in Truth No Beauty? was the fifth episode of Star Trek’s third season to air, with a telepathic envoy’s besotted colleague causing problems for the Enterprise. In this episode Gerry and Iain discuss the challenges associated with extreme beauty.


When a Medusan ambassador, Kollos, comes aboard the Enterprise along with his human envoy Dr. Miranda Jones (Diana Muldaur) and one of the ship’s original designers, Larry Marvick (David Frankham) it is the attractive young woman who draws the most attention, rather than the alien described as so hideous the mere sight of him would drive a human insane.


It soon transpires that Marvick is jealous of Jones’ assignment with the Medusan and, ignoring mandated precautions, he exposes himself to the alien without any barrier. This leads to madness and extreme jeapordy for all on board.


Is There in Truth No Beauty? was directed by Ralph Senensky, the sixth of his seven episodes in the chair. The writer was Jean Lisette Aroeste, whose unsolicited script submission was purchased for the show, the first of her two credits.


In this episode Gerry and Iain considered whether beauty is in the eye of the beholder.


Is There in Truth No Beauty? was released in 1968. It is 50 minutes long and originally aired on the NBC network. It can be viewed on Paramount+ in the United states, Netflix in the UK and is available on DVD and Blu Ray in other countries, including a comprehensive remastered set of all three seasons released by Paramount Home Entertainment.