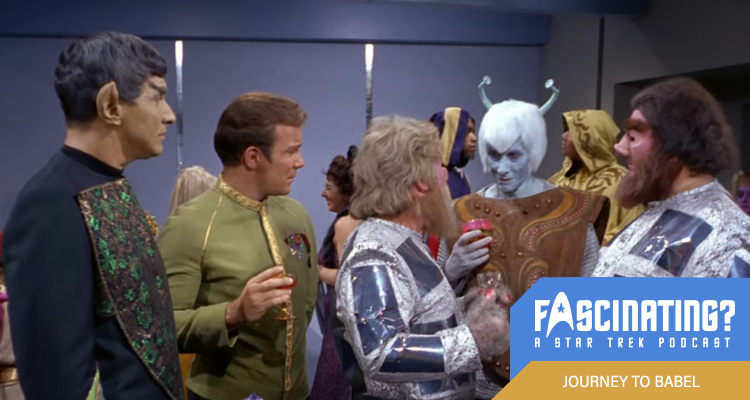 Journey to Babel was the tenth episode of Star Trek’s second season to air, with diplomats en route to a crucial vote gathered together on the Enterprise. In this episode Gerry and Iain discuss the subtle art of diplomacy.


While transporting key diplomats to a conference on a planetoid codenamed Babel, Kirk is surprised to learn that the Vulcan delegation are actually Spock’s parents, Sarek (Mark Lenard) and Amanda (Jane Wyatt).


Unfortunately one passenger has murder in mind and when the Tellarite Gav (John Wheeler) turns up dead, suspicion falls first on Sarek and then the Andorian Thelev (William O’Connell).


Journey to Babel was directed by Joseph Pevney, the ninth of his fourteen Star Trek episodes. The writer was Dorothy Fontana.


In this episode Gerry and Iain considered whether ‘Gav’ is an acceptable name for an alien.


Journey to Babel was released in 1967. It is 50 minutes long and originally aired on the NBC network. It can be viewed on CBS All Access in the United states, Netflix in the UK and is available on DVD and Blu Ray in other countries, including a comprehensive remastered set of all three seasons released by Paramount Home Entertainment.