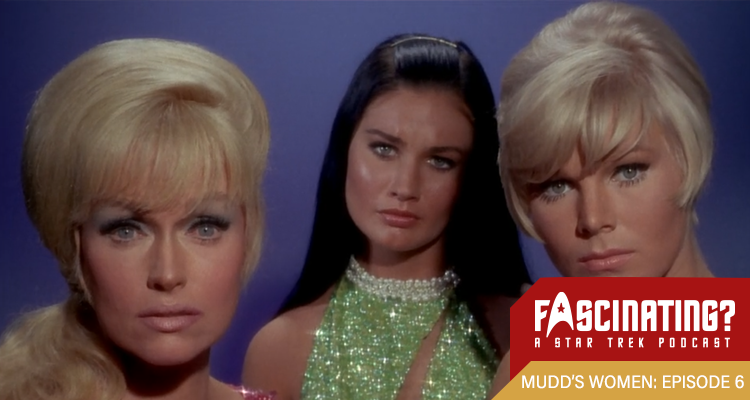 Mudd’s Women was the sixth episode of Star Trek‘s debut season to air, as an intergalactic rogue leverages a unique situation in an effort to secure his freedom. In this episode Gerry and Iain take a look at unambitious women and the social calendar of Rigel XII.


Harry Mudd (Roger C. Carmel) and his ‘cargo’, Ruth (Maggie Thrett), Magda (Susan Denberg) and Eve (Karen Steele) arrive on the Enterprise with a secret to keep, but soon find themselves in a position to influence Kirk’s decision-making.


On Rigel XII the miners, Ben (Gene Dynarski), Herm (Jon Kowal) and Benton (Seamon Glass), look forward to the arrival of their promised wives, knowing they control a resource the Enterprise can’t manage without.


Mudd’s Women was directed by Harvey Hart and was written by Stephen Kandel (from a Gene Roddenberry story idea). Hart was not invited back to the series after concerns about ‘camera cutting’, but Kandel became the go-to writer for all things Harry Mudd.


In this episode Gerry and Iain considered whether Mudd’s motivations were in any way honourable; and lamented the missed opportunity to create female characters with a bit more depth than this trio.


Mudd’s Women was released in 1966. It is 50 minutes long and originally aired on the NBC network. It can be viewed on CBS All Access in the United states, Netflix in the UK and is available on DVD and Blu Ray in other countries, including a comprehensive remastered set of all three seasons released by Paramount Home Entertainment.