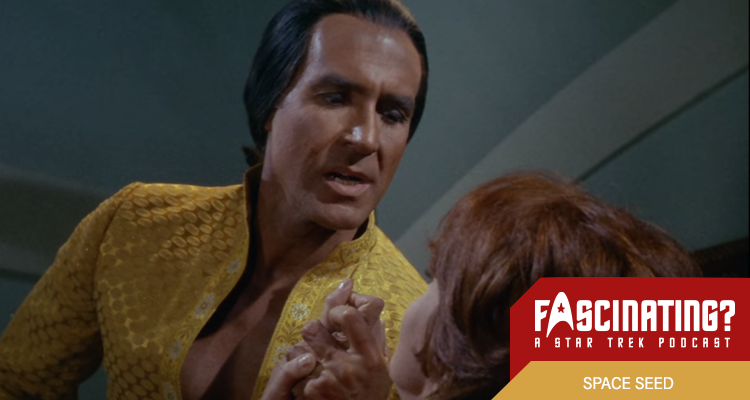 Space Seed was the twenty-second episode of Star Trek’s debut season to air, with an ancient Earth spacecraft delivering some surprising, if sleepy, guests. In this episode Gerry and Iain discuss the fine qualities of twentieth century men.


When the Enterprise comes across the SS Botany Bay, drifting in space, a landing party is surprised to find a number of humans on board in suspended animation. When one unit malfunctions a passenger wakes and is transported to the Enterprise for treatment. His name is Khan (Ricardo Montalban).


After Khan is assessed as a threat and confined to quarters, he is able to escape with the assistance of an infatuated Lt Marla McGivers (Madlyn Rhue) and resuscitate his crew, including Joaquin (Mark Tobin), in an effort to take the Enterprise.


Space Seed was directed by Marc Daniels, one of his record-tying fourteen Star Trek episodes. The initial writer was Carey Wilbur with producer Gene Coon also working on the script.


In this episode Gerry and Iain considered the history they didn’t get taught in school.


Space Seed was released in 1967. It is 50 minutes long and originally aired on the NBC network. It can be viewed on CBS All Access in the United states, Netflix in the UK and is available on DVD and Blu Ray in other countries, including a comprehensive remastered set of all three seasons released by Paramount Home Entertainment.