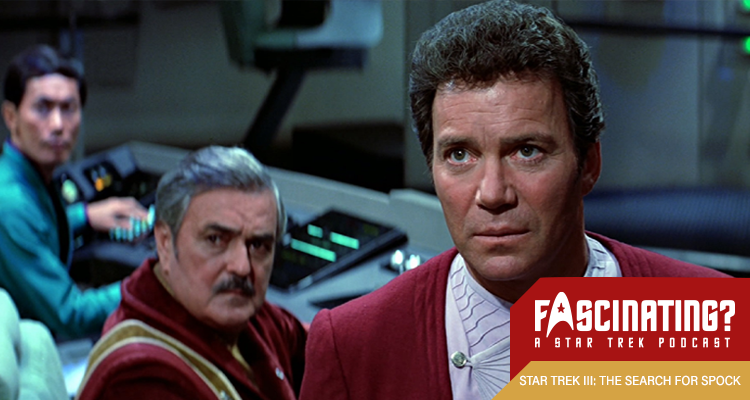 Star Trek III: The Search for Spock was the third big-screen adventure for the Star Trek crew, with the restoration of Spock’s eternal soul to his regenerated body leading Kirk to hijack his own starship. In this episode Gerry and Iain discuss the best way to deal with a pubescent Vulcan in an isolated setting.


In the immediate aftermath of the detonation of the Genesis device, Kirk and the crew of the Enterprise return to Starfleet mourning the death of Spock. Meanwhile, McCoy begins to suffer from some unusual symptoms that appear to be related to the loss of his friend.


Back at Genesis, Saavik (now played by Robin Curtis) and David Marcus are studying the effects of the device with the USS Grissom. When it comes under attack from a Klingon ship under the command of Kruge (Christopher Lloyd), they become stranded on the unstable surface with Spock’s resurrected form.


Star Trek III: The Search for Spock was directed by Leonard Nimoy, his first directorial work for the franchise. The screenplay and story were by Harve Bennett.


In this episode Gerry and Iain considered whether Klingon dogs belong on the bridge of a starship.


Star Trek III: The Search for Spock was released in 1984. It is 1 hour and 45 minutes long. It can be viewed on Paramount+ in the United States and is available on DVD and Blu Ray in other countries.