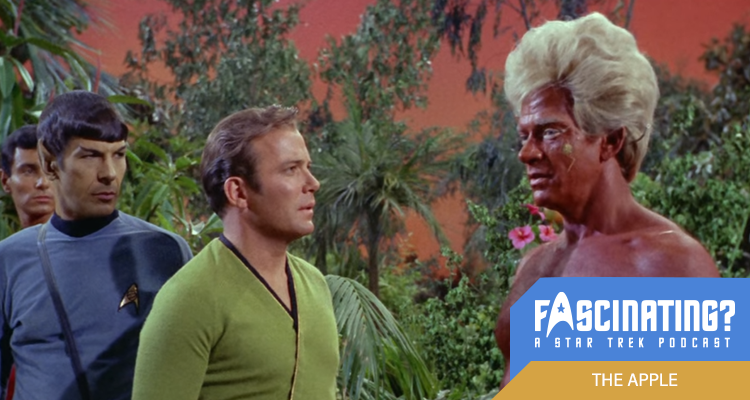 The Apple was the fifth episode of Star Trek’s second season to air, with a native population cruelly disrupted by a careless landing party. In this episode Gerry and Iain discuss disposable crewmen and mechanical deities.


When redshirts start expiring at an alarming rate, Kirk encounters Akuta (Keith Andes), leader of the Feeders of Vaal. Taken back to his village others, including Makora (David Soul) and Sayana (Shari Nims) soon take an interest in the outsiders, particularly Chekov and Yeoman Landon (Celeste Yarnall).


Meanwhile Scotty fights to maintain the Enterprise’s orbit as it begins to suffer retaliatory interference from the surface. Kirk must ultimately decide whether to shatter a belief system to save his crew.


The Apple was directed by Joseph Pevney, the seventh of his fourteen Star Trek episodes. The writer was Max Ehrlich, his only story for he show.


In this episode Gerry and Iain considered leadership and the consequences of bad decisions.


The Apple was released in 1967. It is 50 minutes long and originally aired on the NBC network. It can be viewed on CBS All Access in the United states, Netflix in the UK and is available on DVD and Blu Ray in other countries, including a comprehensive remastered set of all three seasons released by Paramount Home Entertainment.