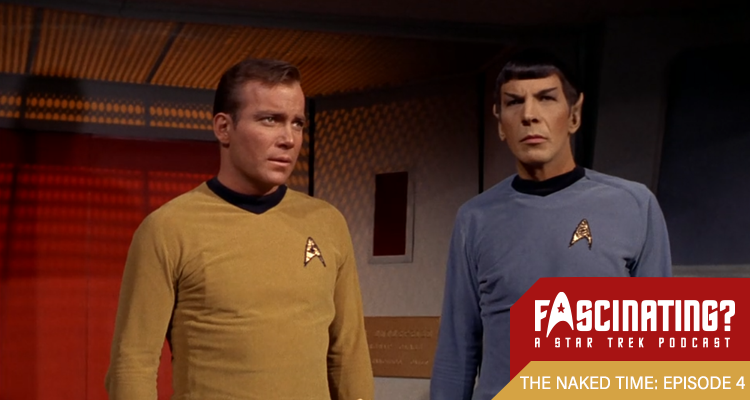 The Naked Time was the fourth episode of Star Trek‘s debut season to air, as a virus rapidly spreads through the crew causing inhibitions and good sense to evaporate. In this episode Gerry and Iain take a look at a swashbuckling Sulu and Kirk’s one true love.


The illness dominates this episode, with first Tormolen (Stewart Moss), then Riley (Bruce Hyde) acting irrationally. The senior staff are not immune, as Sulu and ultimately Kirk and Spock (among others) fall victim and begin to display troubling behaviour.


The Enterprise travels back in time at the end of the episode, raising the question of whether any of this happened at all…


The Naked Time was directed by Marc Daniels and was written by John D.F. Black. This was the only story for which Black received a writing credit, but he was story editor for the show’s first season. This was the second of Daniels’ fifteen episodes behind the camera.


In this episode Gerry and Iain considered the differences between this crew and the established group; the corrupting influence of power; and whether misogyny will live on into the 23rd century.


The Naked Time was released in 1966. It is 50 minutes long and originally aired on the NBC network. It can be viewed on CBS All Access in the United states, Netflix in the UK and is available on DVD and Blu Ray in other countries, including a comprehensive remastered set of all three seasons released by Paramount Home Entertainment.