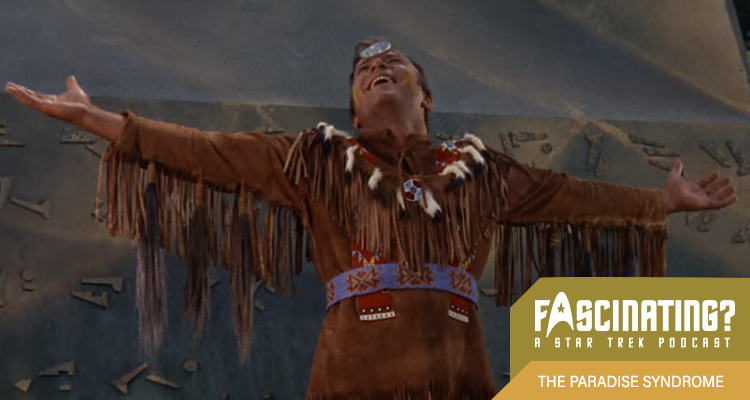 The Paradise Syndrome was the third episode of Star Trek’s third season to air, with an amnesiac Kirk adopted as a god by the inhabitants of an earth-like planet. In this episode Gerry and Iain discuss the pitfalls of divinity.


With an asteroid en-route to create an extinction level event on the planet Amerind, Kirk and Spock take time for a quick tour before setting off to prevent the collision. After an accident leaves Kirk with memory loss, Spock and the Enterprise must leave him behind to deal with the threat.


Meanwhile the amnesiac Kirk is adopted as a deity by the locals and supplants the local medicine chief, Salish (Rudy Solari), taking his position and his bride-to-be Miramanee (Sabrina Scharf). When the time comes to stop the asteroid, however, his lack of omnipotence becomes apparent.


The Paradise Syndrome was directed by Jud Taylor, the first of his five episodes in the chair. The writer was Margaret Armen, the second of her three writing credits for the show.


In this episode Gerry and Iain considered whether falling down trapdoors is an overrated terror.


The Paradise Syndrome was released in 1968. It is 50 minutes long and originally aired on the NBC network. It can be viewed on Paramount+ in the United states, Netflix in the UK and is available on DVD and Blu Ray in other countries, including a comprehensive remastered set of all three seasons released by Paramount Home Entertainment.