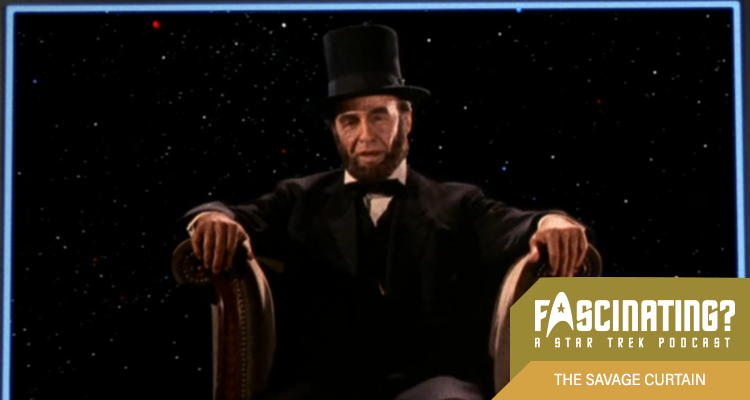 The Savage Curtain was the twenty second episode of Star Trek’s third season to air, with a lava creature seeking to learn about good and evil by pitting Kirk alongside Abraham Lincoln in a battle with Genghis Khan and other villains. In this episode Gerry and Iain discuss whether this whole thing wasn’t done better in Arena.


After some unusual readings are obtained from a seemingly lava-covered planet, the Enterprise crew are surprised to meet President Abraham Lincoln (Lee Bergere) who is keen to come aboard. He invites Kirk and Spock to join him on the surface, where they meet legendary Vulcan leader Surak (Barry Atwater).


Pitted in battle against a group of villains comprising Genghis Khan (Nathan Jung), Col. Green (Phillip Pine), Kahless the Unforgettable (Robert Herron) and Zora of Tiburon (Carol Daniels) by the lava creature Yarnek, they must survive to secure the safety of the Enterprise crew.


The Savage Curtain was directed by Herschel Daugherty, the last of his two episodes. The story was by Gene Roddenberry, the show’s creator.


In this episode Gerry and Iain considered whether Abraham Lincoln will still be considered an important historical figure in the 23rd century.


The Savage Curtain was released in 1969. It is 50 minutes long and originally aired on the NBC network. It can be viewed on Paramount+ in the United states, Netflix in the UK and is available on DVD and Blu Ray in other countries, including a comprehensive remastered set of all three seasons released by Paramount Home Entertainment.