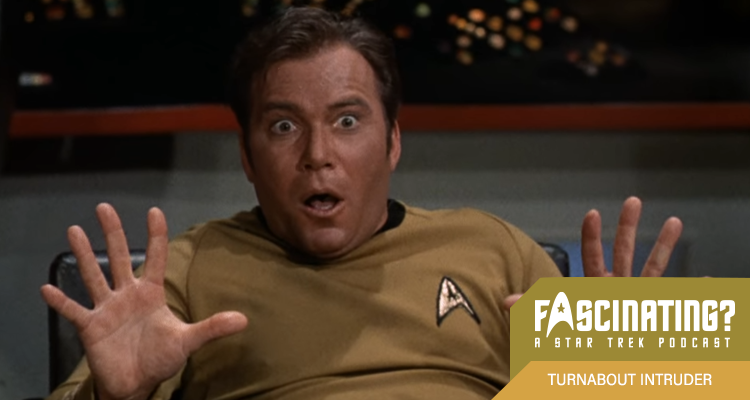 Turnabout Intruder was the twenty fourth and final episode of Star Trek’s third season to air, with Kirk’s body stolen by a jealous ex-lover intent on commanding the Enterprise. In this episode Gerry and Iain discuss role reversal and gender politics in space.


Arriving at a Federation outpost on Camus II, the Enterprise crew find most of the team dead from apparent radiation poisoning and Dr Janice Lester (Sandra Smith) very ill, despite the attentions of Dr Coleman (Harry Landers).


With Coleman distracting Spock and McCoy, Lester takes advantage of the opportunity to swap bodies with Kirk using ancient technology found on the planet. Her plan is to kill Kirk inside her own body and take command of the Enterprise by convincing the crew she is who she now appears to be.


Turnabout Intruder was directed by Herb Wallerstein, the last of his four episodes. The teleplay was by Arthur Singer from a story by Gene Roddenberry.


In this episode Gerry and Iain considered whether life as a woman would be unbearable.


Turnabout Intruder was released in 1969. It is 50 minutes long and originally aired on the NBC network. It can be viewed on Paramount+ in the United states, Netflix in the UK and is available on DVD and Blu Ray in other countries, including a comprehensive remastered set of all three seasons released by Paramount Home Entertainment.