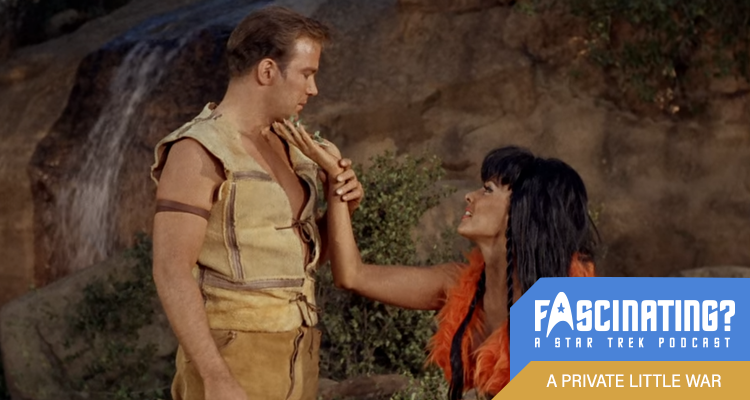 A Private Little War was the nineteenth episode of Star Trek’s second season to air, with two tribes on a planet forced to take up arms against one another by outside agitators. In this episode Gerry and Iain discussed the value of communal haircuts.


Visiting a planet where he was once posted as a young Lieutenant, Kirk is surprised to see an old friend, Tyree (Michael Witney) and his wife Nona (Nancy Kovack) at the head of a tribe that has been isolated and hunted by their neighbours.


Suspecting Klingon involvement, Kirk finds that village leader Apella (Arthur Bernard) is taking counsel from the Klingon Krell (Ned Romero). With this knowledge, he sets about redressing the balance of power.


A Private Little War was directed by Marc Daniels, his eleventh of fourteen Star Trek episodes. The writer was Don Ingalls, the last of his two stories for the show.


In this episode Gerry and Iain considered what war is good for.


A Private Little War was released in 1968. It is 50 minutes long and originally aired on the NBC network. It can be viewed on CBS All Access in the United states, Netflix in the UK and is available on DVD and Blu Ray in other countries, including a comprehensive remastered set of all three seasons released by Paramount Home Entertainment.