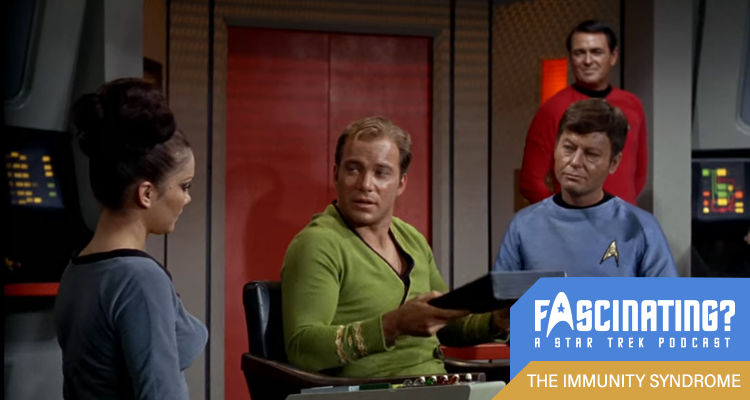 The Immunity Syndrome was the eighteenth episode of Star Trek’s second season to air, with a single celled organism threatening to engulf the galaxy. In this episode Gerry and Iain discussed some unusual crew behaviour.


When the USS Intrepid, a ship crewed entirely by Vulcans, disappears investigating a new phenomenon, the exhausted Enterprise crew are tasked with investigating the situation.


With Spock and McCoy competing to lead a one-man suicide mission, Kirk must decide which of his friends to save and which to allow to proceed alone into the core of the creature.


The Immunity Syndrome was directed by Joseph Pevney, his last of fourteen Star Trek episodes. The writer was Robert Sabaroff, who only contributed this one story to the series, but returned for The Next Generation.


In this episode Gerry and Iain considered whether the virus could have been combatted by better social distancing.


The Immunity Syndrome was released in 1968. It is 50 minutes long and originally aired on the NBC network. It can be viewed on CBS All Access in the United states, Netflix in the UK and is available on DVD and Blu Ray in other countries, including a comprehensive remastered set of all three seasons released by Paramount Home Entertainment.