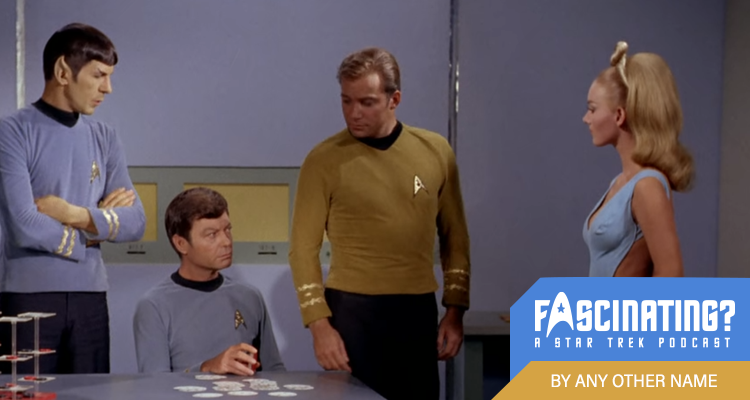 By Any Other Name was the twenty second episode of Star Trek’s second season to air, with intergalactic aliens determined to travel home by hijacking the Enterprise. In this episode Gerry and Iain discussed long journeys and the need to have a few good podcasts queued up in advance.


Visiting a planet believed to be uninhabited, Kirk and Spock are captured by a handful of aliens from the neighbouring Andromeda galaxy and made to watch a redshirt Yeoman (Julie Cobb) be reduced to dust on the orders of Rojan (Warren Stevens).


Realising the hijackers are struggling to come to terms with their new human forms, Kirk and the senior staff set out to stimulate their senses, with the captain’s duty compelling him to seduce Kelinda (Barbara Bouchet) as Scotty tries to drink Tomar (Robert Fortier) under the table and McCoy regularly injects Hanar (Stewart Moss) with an irritant.


By Any Other Name was directed by Marc Daniels, his twelfth of fourteen Star Trek episodes. The writer was Jerome Bixby, with this the second of four episodes he wrote for the show.


In this episode Gerry and Iain considered whether a many-tentacled being could be attractive in the right package.


By Any Other Name was released in 1968. It is 50 minutes long and originally aired on the NBC network. It can be viewed on Paramount+ in the United states, Netflix in the UK and is available on DVD and Blu Ray in other countries, including a comprehensive remastered set of all three seasons released by Paramount Home Entertainment.