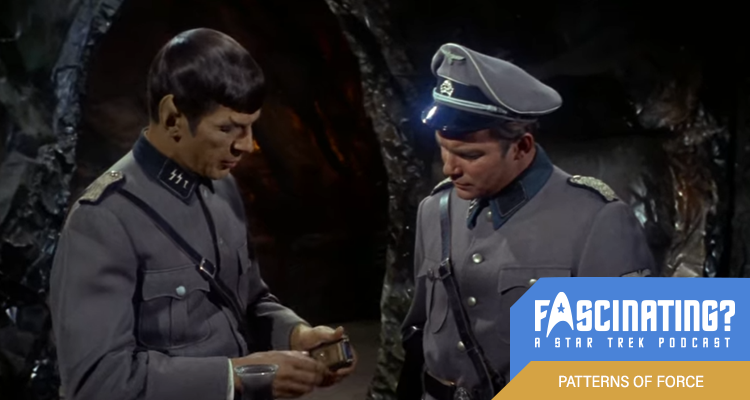 Patterns of Force was the twenty-first episode of Star Trek’s second season to air, with a Federation observer leading an alien world to create their own version of the Nazis. In this episode Gerry and Iain discussed whether there is any problem to which resurrecting the Nazis would be a good solution.


Travelling to find what has become of Federation observer John Gill (David Brian), Kirk and Spock find themselves on the planet Ekos, where the natives have surprisingly developed a carbon-copy of Earth’s 20th century Nazi Party, dedicated to eliminating visitors from the neighbouring planet of Zeon, then destroying Zeon itself.


With the help of underground Zeon resistance fighters Isak (Richard Evans) and Abrom (William Wintersole) and renegade Ekosians Daras (Valora Noland) and Eneg (Patrick Horgan) they look to discover the truth and take down the malevolent Melakon (Skip Homeier).


Patterns of Force was directed by Vincent McEveety, his fourth of six Star Trek episodes. The writer was John Meredyth Lucas, with this the second of four episodes on which he received a writing credit.


In this episode Gerry and Iain considered what the Nazis ever did for us.


Patterns of Force was released in 1968. It is 50 minutes long and originally aired on the NBC network. It can be viewed on Paramount+ in the United states, Netflix in the UK and is available on DVD and Blu Ray in other countries, including a comprehensive remastered set of all three seasons released by Paramount Home Entertainment.