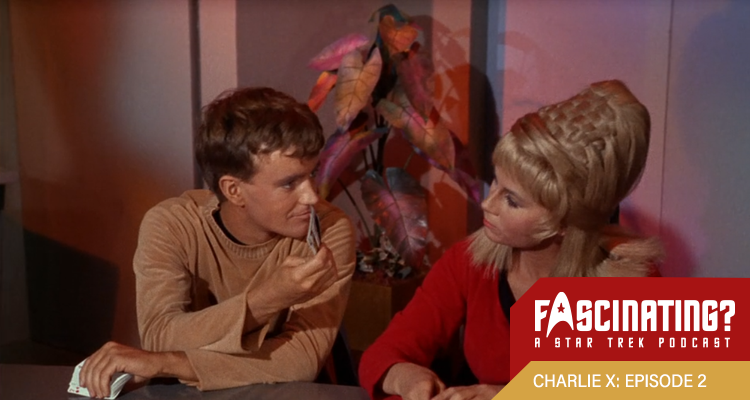 Charlie X was the second episode of Star Trek‘s debut season to air, bringing a wildcard aboard the Enterprise in the shape of orphan Charlie Evans. In this episode Gerry and Iain take a look at problems that come up when you don’t make new people feel welcome and also they have the power to vanish you.


Along with Charlie (Robert Walker Jr), we are introduced to Captain Ramert (Charles Stewart) of the ill-fated Antares, a young Yeoman named Tina (Pat McNulty) and an eerie representation of an ancient Thasian (Abraham Sofaer)


For the only time there is a role for series creator Gene Roddenberry in the episode, appearing (in audio if not in vision) as the voice of the ship’s chef as he struggles with Charlie’s intervention in Thanksgiving dinner.


Charlie X was directed by Lawrence Dobkin and was written by Gene Roddenberry and D.C. Fontana, both legendary figures in the history of Star Trek. Dobkin did not direct any further episodes, but as an actor went on to appear in an episode of Star Trek: The Next Generation.


In this episode Gerry and Iain considered how Kirk and the crew handled Charlie’s immaturity and lack of control as well as looking at the resolution and whether it was fair to allow the Thasians to take the boy back.


Charlie X was released in 1966. It is 50 minutes long and originally aired on the NBC network. It can be viewed on CBS All Access in the United states, Netflix in the UK and is available on DVD and Blu Ray in other countries, including a comprehensive remastered set of all three seasons released by Paramount Home Entertainment.