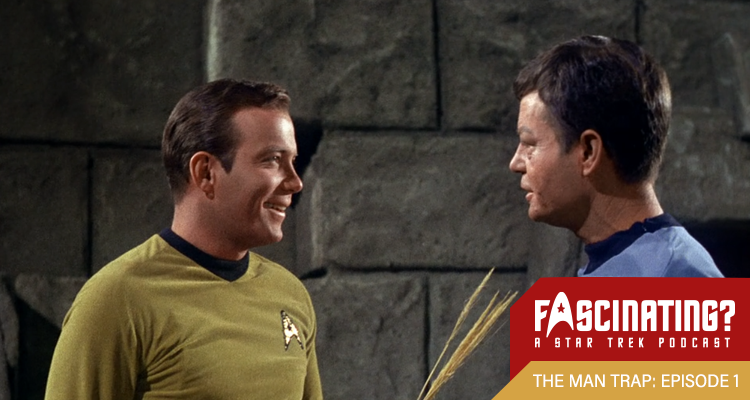 The Man Trap was the first episode of Star Trek‘s debut season to air, introducing audiences to William Shatner as Captain Kirk, Leonard Nimoy as Spock and DeForest Kelley as Dr. Leonard ‘Bones’ McCoy. In this episode Gerry and Iain take a look at the dangers of spending too much time with a former lover who is now a salt-devouring creature from another planet.


We spend time with many of our main ensemble in this episode. Shatner’s Kirk and Kelley’s McCoy make initial contact with the antagonists, Professor Crater (Alfred Ryder) and his wife Nancy (Jeanne Bal). Meanwhile Nimoy’s Spock deals with a playful Uhura (Nichelle Nichols) on the Enterprise.


Also appearing are George Takei as Sulu and Grace Lee Whitney as Yeoman Rand, who fend off the salt vampire in Sulu’s botany lab. Michael Zaslow‘s Darnell and Bruce Watson‘s Green fail to survive their encounters with Nancy.


The Man Trap was directed by Marc Daniels and was written by George Clayton Johnson. While Daniels would go on to helm fourteen further episodes, this was Johnson’s only work for the show.


In this episode Gerry and Iain investigated how much (or how little) Gerry knew about Star Trek ahead of starting the podcast and considered whether it could be morally defensible to send a species to extinction to save yourself.


The Man Trap was released in 1966. It is 50 minutes long and originally aired on the NBC network. It can be viewed on CBS All Access in the United states, Netflix in the UK and is available on DVD and Blu Ray in other countries, including a comprehensive remastered set of all three seasons released by Paramount Home Entertainment.