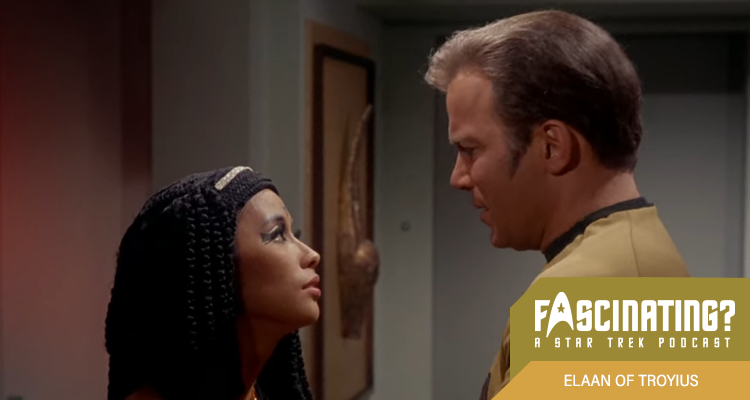 Elaan of Troyius was the thirteenth episode of Star Trek’s third season to air, with a special guest making life difficult on board the Enterprise. In this episode Gerry and Iain discuss good manners and how to learn them.


When the Enterprise picks up Elaan, the Dohlman of Elas (France Nuyen), who is to be wed to the ruler of Troyius in an effort to end a war between the two planets, conflict erupts almost immediately with the Troyian ambassador Petri (Jay Robinson, in a role that you know Jeffrey Combs would play were it the 90s).


When a Klingon ship approaches it becomes apparent that the Enterprise has been sabotaged by Kryton (Tony Young), one of the Elasian guards. Kirk must overcome a powerful intoxication to steer the ship safely to its destination.


Elaan of Troyius was written and directed by John Meredyth Lucas. This is the only episode in the series to be directed by the writer.


In this episode Gerry and Iain considered house guests and why we aren’t in favour.


Elaan of Troyius was released in 1968. It is 50 minutes long and originally aired on the NBC network. It can be viewed on Paramount+ in the United states, Netflix in the UK and is available on DVD and Blu Ray in other countries, including a comprehensive remastered set of all three seasons released by Paramount Home Entertainment.