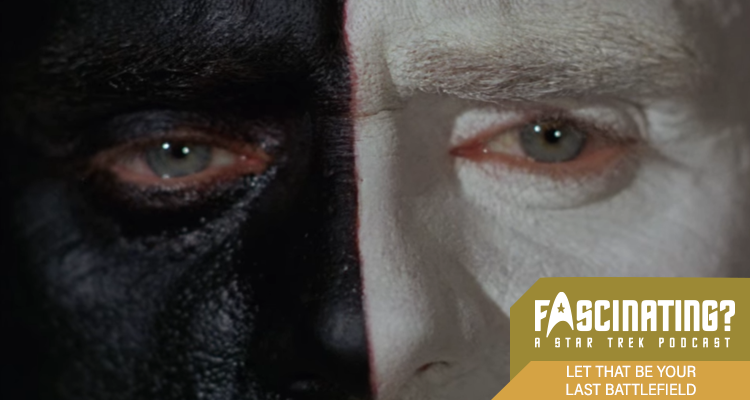 Let That Be Your Last Battlefield was the fifteenth episode of Star Trek’s third season to air, with two intractable foes bringing their millenia old dispute to the Enterprise. In this episode Gerry and Iain discuss the difference between a terrorist and a freedom fighter.


After identifying a missing Starfleet shuttle, seemingly disabled and leaking oxygen, Kirk brings it aboard along with its enigmatic occupant, Lokai (Lou Antonio) of the planet Charon. Resolving to take him to Starbase 4 to face charges once their urgent humanitarian mission is complete, Kirk seems unamused by his visitor.


Matters are complicated when a similar, but violently opposed, character named Bele (Frank Gorshin) joins them on the ship. He demands Lokai be handed over to him for punishment, but with his other guest seeking sanctuary, Kirk faces a tough decision.


Let That Be Your Last Battlefield was directed by Jud Taylor, the third of his five stints in the chair. The teleplay was by Oliver Crawford, the second of his three scripts for the show coming some time after his first (for The Galileo Seven).


In this episode Gerry and Iain considered how on the nose an analogy needs to be before it stops being an analogy.


Let That Be Your Last Battlefield was released in 1969. It is 50 minutes long and originally aired on the NBC network. It can be viewed on Paramount+ in the United states, Netflix in the UK and is available on DVD and Blu Ray in other countries, including a comprehensive remastered set of all three seasons released by Paramount Home Entertainment.