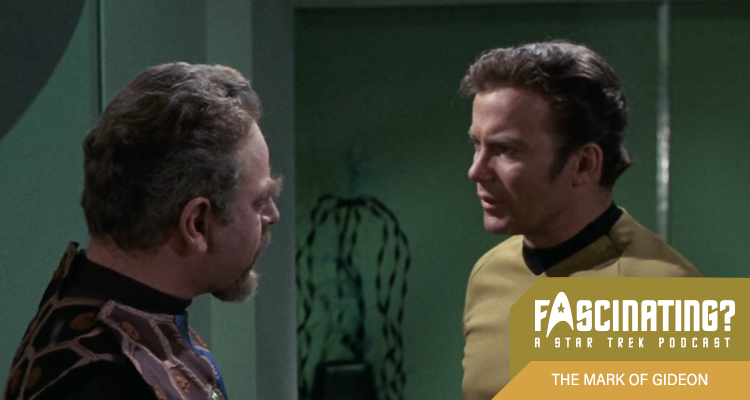 The Mark of Gideon was the sixteenth episode of Star Trek’s third season to air, with an overpopulated world looking for a desperate solution. In this episode Gerry and Iain discuss the necessity for a full-scale replica Enterprise.


Hoping to welcome the reclusive planet Gideon into the Federation, Kirk is given special permission to visit and meet with the council of Elders. On arrival, however, he finds himself not in the council chambers as expected, but still aboard the Enterprise, with the whole crew missing and just one woman present, named Odona (Sharon Acker).


Meanwhile, Spock faces off against the stubborn Gideon council leader, Hodin (David Hurst). When Hodin turns out to be Odona’s father and his plan to sacrifice her life to inspire a generation to follow suit is exposed, Spock must breach Starfleet orders if he is to recover the captain.


The Mark of Gideon was directed by Jud Taylor, the fourth of his five stints in the chair. The teleplay was by Cyrano Jones himself, Stanley Adams, in conjuction with George Slavin, each man contributing his only story for the show.


In this episode Gerry and Iain considered the prospects for success of a call to voluntary generational death.


The Mark of Gideon was released in 1969. It is 50 minutes long and originally aired on the NBC network. It can be viewed on Paramount+ in the United states, Netflix in the UK and is available on DVD and Blu Ray in other countries, including a comprehensive remastered set of all three seasons released by Paramount Home Entertainment.