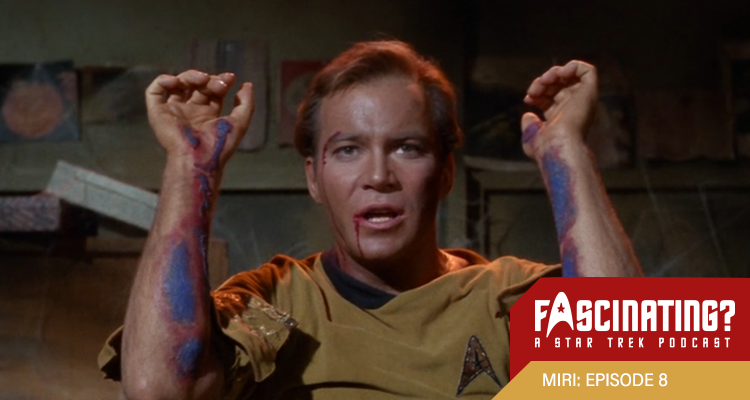 Miri was the eighth episode of Star Trek’s debut season to air, with a duplicate earth populated by feral children leading the senior staff of the Enterprise to contract a fatal illness. In this episode Gerry and Iain take a look at creepy kids, speedy science and the level of irritation caused by a simple bunk bunk bunking.


On a planet exactly like Earth (exactly like it) the Enterprise crew follow an automated distress signal to a seemingly uninhabited town. After finding Miri (Kim Darby) hiding in a closet, they learn the local children are alive but uncared for.


As a result, the children have formed a rudimentary social order under the questionable leadership of a kid called Jahn (Michael J. Pollard) with military guidance from a child who lives to bunkbunkbunk (John Megna). McCoy and Spock work to find a cure for a terrible illness that wiped out local adult life and threatens the children and the ship’s crew as well. A number of the children in this episode were played by the kids of the main cast and crew.


Miri was directed by Vincent McEveety and was written by Adrian Spies. McEveety went on to direct Dagger of the Mind – the following episode – and four further installments. Spies did not write any more Star Trek, but did later pen an episode of TJ Hooker which also featured William Shatner.


In this episode Gerry and Iain considered why the duplicate Earth was not subject to more scrutiny and examined what it was about this episode that made it unsuitable for British audiences in the 70s and 80s.


Miri was released in 1966. It is 50 minutes long and originally aired on the NBC network. It can be viewed on CBS All Access in the United states, Netflix in the UK and is available on DVD and Blu Ray in other countries, including a comprehensive remastered set of all three seasons released by Paramount Home Entertainment.