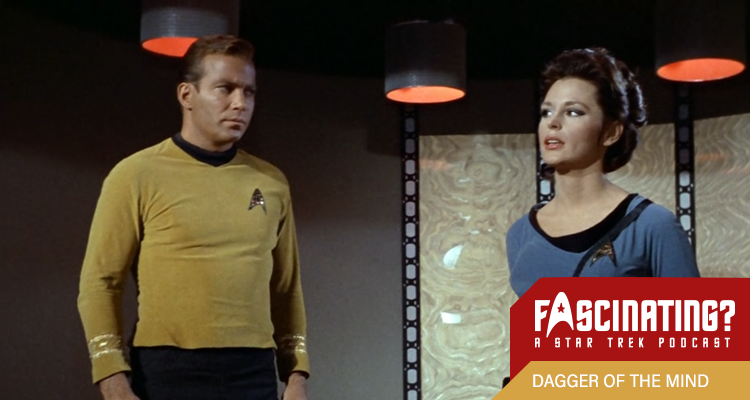 Dagger of the Mind was the ninth episode of Star Trek’s debut season to air, with an escaped patient from a penal colony raising questions about the ethical standards employed at the facility. In this episode Gerry and Iain take a look that awkward moment when you bump into the colleague you haven’t seen since you hooked up with them at the office Christmas party.


After delivering medical supplies to the Tantalus Penal Colony, the crew of the Enterprise are surprised to find one of the inmates there has managed to sneak on board. The escapee is Dr Simon Van Gelder (Morgan Woodward) and his story takes a dramatic twist as he overcomes the trauma of his experience to report serious malpractice on the part of colony director Dr Tristan Adams (James Gregory).


Kirk decides to investigate and is assigned specialist Dr Helen Noel (Marianna Hill) to accompany him on a visit to the colony. The pair meet with Adams and former patient, turned therapist Lethe (Susanne Wasson) who explain the situation. Kirk’s suspicions lead to further exploration and an unfortunate encounter with Brown’s neural neutralizer as the plot thickens.


Dagger of the Mind was directed by Vincent McEveety. The episode was written by Shimon Wincelberg under the pen-name S. Bar-David. This was the second of McEveety’s six episodes and was shot along with the previous episode, Miri, as part of an extended shoot. Wincelberg wrote one further Star Trek episode.


In this episode Gerry and Iain considered McCoy’s stunning intervention on behalf of his patient and Kirk’s questionable use of willpower. Gerry also asked whether listeners could identify which sitcom actor Simon Van Gelder reminded him of?


Dagger of the Mind was released in 1966. It is 50 minutes long and originally aired on the NBC network. It can be viewed on CBS All Access in the United states, Netflix in the UK and is available on DVD and Blu Ray in other countries, including a comprehensive remastered set of all three seasons released by Paramount Home Entertainment.