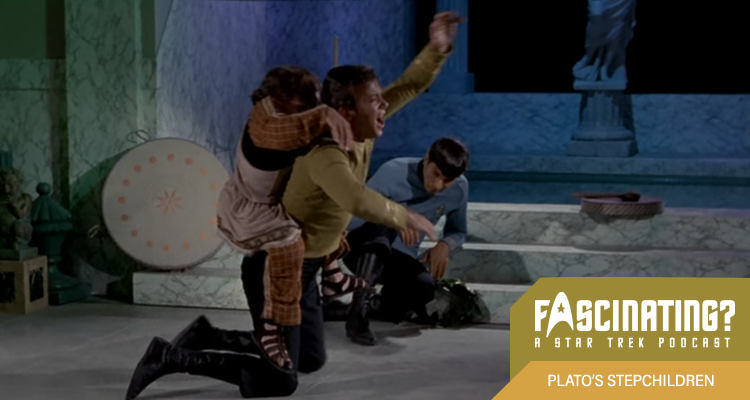 Plato’s Stepchildren was the tenth episode of Star Trek’s third season to air, with Kirk and Spock forced to endure a series of humiliations as an alien race try to persuade McCoy to join them. In this episode Gerry and Iain discuss the morality of telekinesis.


Responding to a plea for help, Kirk, Spock and McCoy visit the Platonians to treat their Philosopher King, Parmen (Liam Sullivan), who has suffered a minor wound which became infected due to a lack of appropriate medical care.


Parmen and his wife, Philana (Barbara Babcock) intend to use their powers to detain McCoy permanently and dispose of the rest of the Enterprise crew, but with help from Alexander (Michael Dunn) there may be a way to turn the tables.


Plato’s Stepchildren was directed by David Alexander, the first of his two Star Trek episodes. The writer was Meyer Dolinsky, his only contribution to the show.


In this episode Gerry and Iain considered amateur dramatics and the potential for writer’s revenge.


Plato’s Stepchildren was released in 1968. It is 50 minutes long and originally aired on the NBC network. It can be viewed on Paramount+ in the United states, Netflix in the UK and is available on DVD and Blu Ray in other countries, including a comprehensive remastered set of all three seasons released by Paramount Home Entertainment.