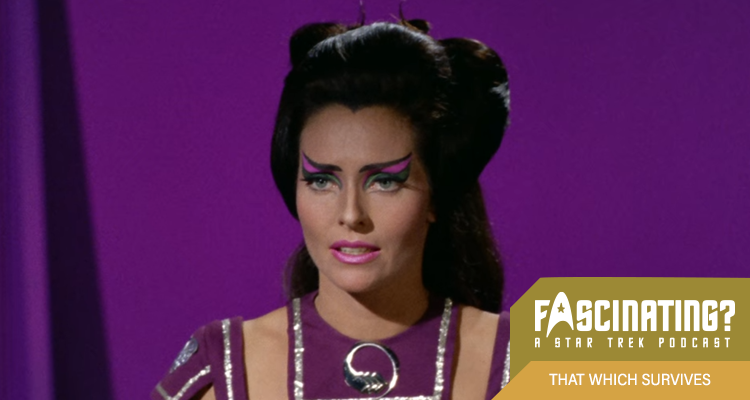 That Which Survives was the seventeenth episode of Star Trek’s third season to air, with an automated defence system causing havoc for Kirk and the Enterprise. In this episode Gerry and Iain discuss whether beauty is worth consideration.


After beaming down to an ‘impossible’ world, Kirk, McCoy and Sulu quickly lose their colleague D’Amato (Arthur Batanides) to the touch of a woman we later learn to be a projection of Losira (Lee Meriwether), the last inhabitant of the planet.


Meanwhile, Spock and the Enterprise are thrown almost a thousand light years away and must combat sabotage by Losira as they seek to return in time to rescue their comrades, leading to an irritable Spock and a frustrated Scotty finding a way to work productively together.


That Which Survives was directed by Herb Wallerstein, the third of his four stints in the chair. The story was by Dorothy Fontana, although she applied the pseudonym Michael Richards on account of her dissatisfaction with changes to the script.


In this episode Gerry and Iain considered what happens when a person turns completely 2D.


That Which Survives was released in 1969. It is 50 minutes long and originally aired on the NBC network. It can be viewed on Paramount+ in the United states, Netflix in the UK and is available on DVD and Blu Ray in other countries, including a comprehensive remastered set of all three seasons released by Paramount Home Entertainment.