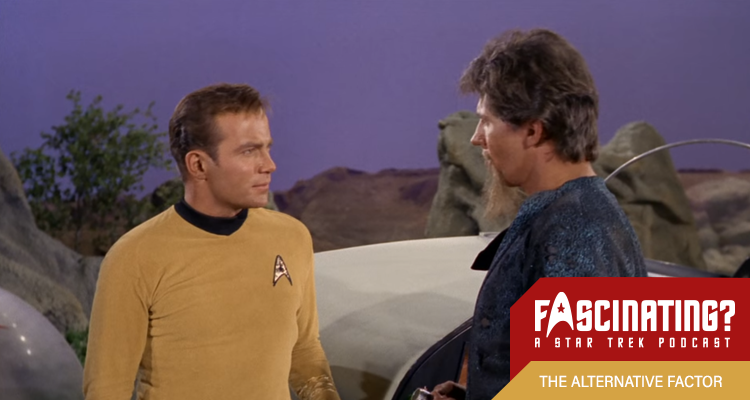 The Alternative Factor was the twenty-seventh episode of Star Trek’s debut season to air, with a mysterious stranger locked in a struggle against his inverse self. In this episode Gerry and Iain discuss a quite magnificent beard.


After a massive and unprecedented phenomenon puts the rest of Starfleet into retreat, the Enterprise is left to investigate what is feared to be an invasion. At the focal point they discover a man named Lazarus (Robert Brown) on a mission to destroy his sworn enemy.


When the ship’s dilithium crystals are stolen, Kirk pursues Lazarus to the planet below, looking to find answers to both the crystal theft and the apparent tear in the fabric of their universe.


The Alternative Factor was directed by Gerd Oswald, the second of his two Star Trek episodes. The writer was Don Ingalls, the first of two stories he contributed to the show.


In this episode Gerry and Iain considered whether they could get their alternate universe selves to sit through this episode for them.


The Alternative Factor was released in 1967. It is 50 minutes long and originally aired on the NBC network. It can be viewed on CBS All Access in the United states, Netflix in the UK and is available on DVD and Blu Ray in other countries, including a comprehensive remastered set of all three seasons released by Paramount Home Entertainment.