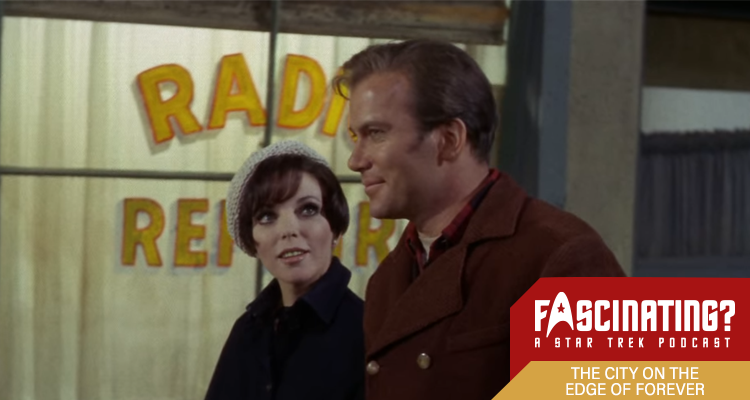 The City on the Edge of Forever was the twenty-eighth episode of Star Trek’s debut season to air, with a love affair threatening to change history as we know it. In this episode Gerry and Iain discuss killers, assassins and murderers with a pinch of time-travel for good measure.


After an accidental overdose and a temporal anomaly combine to send McCoy into the past, Kirk and Spock must travel to Earth in the early 1930s to correct changes the Doctor has made to history before they occur.


Arriving in the midst of the Great Depression, the two men find sort from a local Mission, under the guidance of Edith Keeler (Joan Collins). Finding himself hopelessly attracted to his host, Kirk must make a terrible decision when Spock reveals that history turns on whether Keeler lives or dies.


The City on the Edge of Forever was directed by Joseph Pevney, the fifth of his fourteen Star Trek episodes. The writer was Harlan Ellison, a charismatic figure in his own right.


In this episode Gerry and Iain considered whether they could be happy with a flop, some work to do and two square meals a day.


The City on the Edge of Forever was released in 1967. It is 50 minutes long and originally aired on the NBC network. It can be viewed on CBS All Access in the United states, Netflix in the UK and is available on DVD and Blu Ray in other countries, including a comprehensive remastered set of all three seasons released by Paramount Home Entertainment.