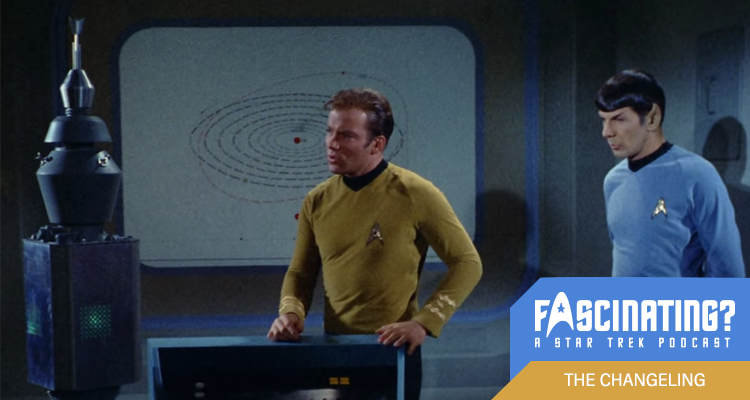 The Changeling was the third episode of Star Trek’s second season to air, with the Enterprise threatened by a sentient spacecraft intent on destroying imperfect organic life. In this episode Gerry and Iain discuss artificial intelligence and the man versus machine debate.


When the Enterprise brings a probe aboard it reveals itself to be Nomad (voiced by Vic Perrin), a probe launched from Earth by Jackson Roykirk (Marc Daniels) in the early 21st century. Mistaking Kirk for its creator, the device postpones its drive to destroy all organic life on his instructions.


As Nomad learns more about its new environment the truth about its imperfect origins cause it to experience a crisis. Kirk must hope his authority is enough to prevent an end to life in the galaxy.


The Changeling was directed by Marc Daniels, the seventh of his fourteen Star Trek episodes. The writer was John Meredyth Lucas, who would go on to write three more episodes, as well as directing and producing others.


In this episode Gerry and Iain considered whether the ridiculous idea that women’s minds are somehow irrational and incapable of logic could possible endure to the twenty third century.


The Changeling was released in 1967. It is 50 minutes long and originally aired on the NBC network. It can be viewed on CBS All Access in the United states, Netflix in the UK and is available on DVD and Blu Ray in other countries, including a comprehensive remastered set of all three seasons released by Paramount Home Entertainment.