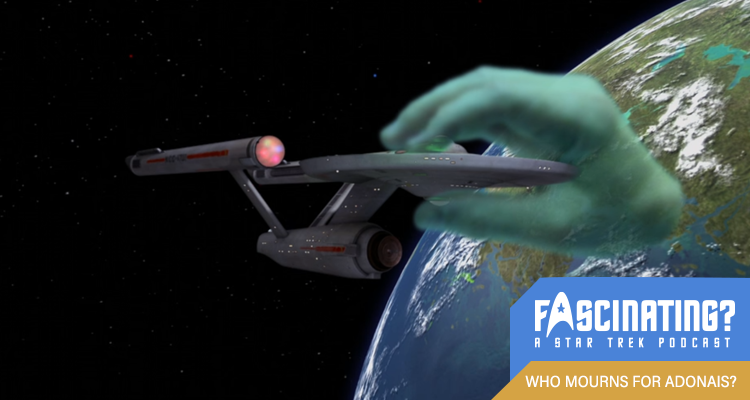 Who Mourns for Adonais? was the second episode of Star Trek’s second season to air, with an ancient Greek god looking to rekindle past glories. In this episode Gerry and Iain discuss a giant green hand and a green-eyed monster.


When the Enterprise is caught by a big green hand while orbiting a planet, Kirk and some crew members are summoned to the surface by a being claiming to be the Greek god Apollo (Michael Forest).


Matters are complicated by Scotty’s jealous and inappropriate pursuit of the disinterested Lt. Carolyn Palamas (Leslie Parrish), who has also caught Apollo’s eye. Ultimately she must choose between love and duty.


Who Mourns for Adonais? was directed by Marc Daniels, the sixth of his fourteen Star Trek episodes. The writer was Irishman
Gilbert Ralston, his only episode for the show.


In this episode Gerry and Iain considered whether there was some medical reason for Scotty’s uncharacteristic behaviour.


Who Mourns for Adonais? was released in 1967. It is 50 minutes long and originally aired on the NBC network. It can be viewed on CBS All Access in the United states, Netflix in the UK and is available on DVD and Blu Ray in other countries, including a comprehensive remastered set of all three seasons released by Paramount Home Entertainment.