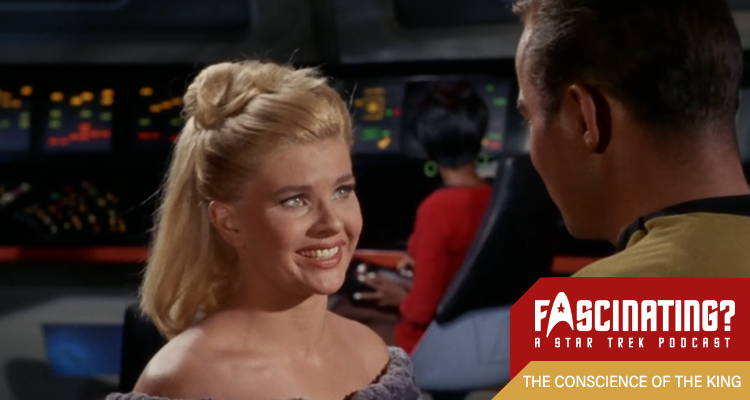 The Conscience of the King was the thirteenth episode of Star Trek‘s debut season to air, with a travelling theatre group bringing back some bad memories for Kirk. In this episode Gerry and Iain debate an imperfect seduction and brush up on their Shakespeare.


Kirk and the Enterprise are summoned by Tom Leighton (William Sargent), an old acquaintance who has made a startling discovery. While hosting a traveling theatre troupe Leighton observes that the lead actor, Anton Karidian (Arnold Moss) bears a remarkable resemblance to Kodos the Exectioner.


Kirk is one of only 9 survivors who witnessed Kodos massacre thousands of innocent people. When Leighton turns up dead and it is learned six others predeceased him while the theatre company was nearby, suspicion falls on Karidian. Kirk seduces Karidian’s daughter, Lenore (Barbara Anderson), to draw the company on board the Enterprise, but does this play into his hands or theirs?


The Conscience of the King was directed by Gerd Oswald, the first of two episodes he helmed. The episode was written by Barry Trivers, who made no further contribution to the series.


In this episode Gerry and Iain considered whether it is better to be or not to be and whether the lady doth protest too much.


The Conscience of the King was released in 1966. It is 50 minutes long and originally aired on the NBC network. It can be viewed on CBS All Access in the United states, Netflix in the UK and is available on DVD and Blu Ray in other countries, including a comprehensive remastered set of all three seasons released by Paramount Home Entertainment.