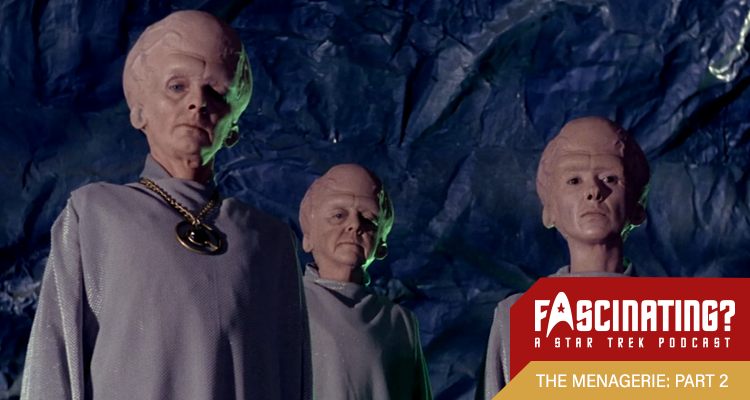 The Menagerie: Part 2 was the twelfth episode of Star Trek‘s debut season to air. In this episode Gerry and Iain consider the motivations of the Talosians and whether a happy ending was the right outcome for Captain Pike.


As Spock’s Court Martial continues, we see the former captain of the Enterprise, Christopher Pike (Jeffrey Hunter) captured by the Talosians who hope to develop a relationship between him and Vina (Susan Oliver) and breed a group of human slaves to populate the scarred surface of their planet.


The nature of the Talosian’s power made it difficult for Pike to know what was real and what imagined. This extended to Captain Kirk as a shocking twist revealed that he, too, had been deceived. In a rousing finale the invalided Pike is restored to a life of fantasy with Vina on Talos IV.


The Menagerie: Part 2 was officially directed by Robert Butler, though his work was limited to directing the original pilot episode, The Cage, from which the footage of Talos IV was taken. The episode was written by Gene Roddenberry.


In this episode Gerry and Iain considered who was running this trial! and how the late revelations shifted the focus of the two-parter from Spock to Kirk.


The Menagerie: Part 2 was released in 1966. It is 50 minutes long and originally aired on the NBC network. It can be viewed on CBS All Access in the United states, Netflix in the UK and is available on DVD and Blu Ray in other countries, including a comprehensive remastered set of all three seasons released by Paramount Home Entertainment.