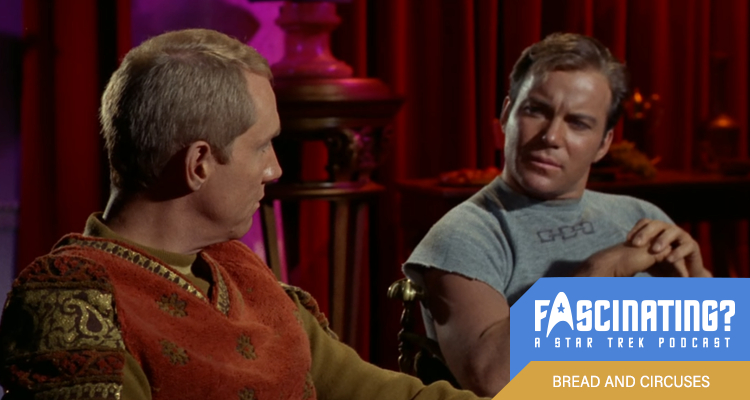 Bread and Circuses was the twenty fifth episode of Star Trek’s second season to air, with an alien world seemingly maintaining a Roman-style culture into their equivalent of Earth’s 20th century. In this episode Gerry and Iain discussed coming, seeing and conquering.


When the Enterprise intercepts a domestic television broadcast from a primitive world, it seems to show crewmen from the SS Beagle, a ship lost in the vicinity six years earlier. Kirk, Spock and McCoy beam down and are greeted by cultists Flavius (Rhodes Reason) and Septimus (Ian Wolfe).


Learning that the Beagle’s captain, Merik (William Smithers) has taken a leading role in the Roman society, the Enterprise crew must attempt to extract him without exposing their presence, Unfortunately Proconsul Claudius Marcus (Logan Ramsey) has other ideas.


Bread and Circuses was directed by Ralph Senensky, the fifth of his six episodes in the chair. The writing credit perhaps ought to have gone to John Kneubuhl, but instead Genes Roddenberry and Coon took the plaudits.


In this episode Gerry and Iain considered one tiny Gaulish village that still held out against the Roman invaders.


Bread and Circuses was released in 1968. It is 50 minutes long and originally aired on the NBC network. It can be viewed on Paramount+ in the United states, Netflix in the UK and is available on DVD and Blu Ray in other countries, including a comprehensive remastered set of all three seasons released by Paramount Home Entertainment.