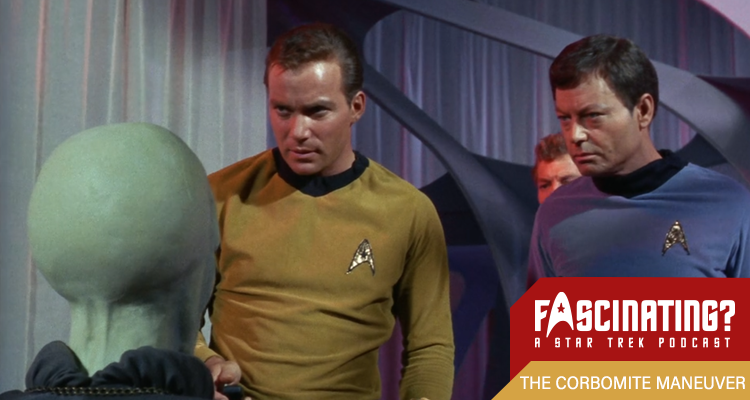 The Corbomite Maneuver was the tenth episode of Star Trek‘s debut season to air, though the first to be produced. In this episode Gerry and Iain cower at the sight of a scary baby and question whether Kirk’s tactics were effective enough to name an episode after them.


When the Enterprise is forced to destroy an unidentified space cube that bars its way, Kirk resolves to press forward with the mission, leading to an encounter with the giant spacecraft Fesarius under the control of Balok (voiced by Ted Cassidy).


After surviving a potentially deadly stand-off Kirk offers aid to his apparently stricken rival, earning his trust and respect. Visiting Balok’s vessel Kirk, McCoy and Lt. Bailey (Anthony Call) are shocked to find he is not the creature they expected, but a small, child-like humanoid (Clint Howard, voiced by Walker Edmiston) with whom they can establish a connection.


The Corbomite Maneuver was directed by Joseph Sargent. The episode was written by Jerry Sohl, who would later contribute two further stories to the series. This was Sargent’s only episode of Star Trek, but he is credited with creating Spock’s iconic ‘Fascinating’ response, from which our podcast takes its name.


In this episode Gerry and Iain considered Balok’s true intentions and the impact of Kirk’s dietary restrictions.


The Corbomite Maneuver was released in 1966. It is 50 minutes long and originally aired on the NBC network. It can be viewed on CBS All Access in the United states, Netflix in the UK and is available on DVD and Blu Ray in other countries, including a comprehensive remastered set of all three seasons released by Paramount Home Entertainment.