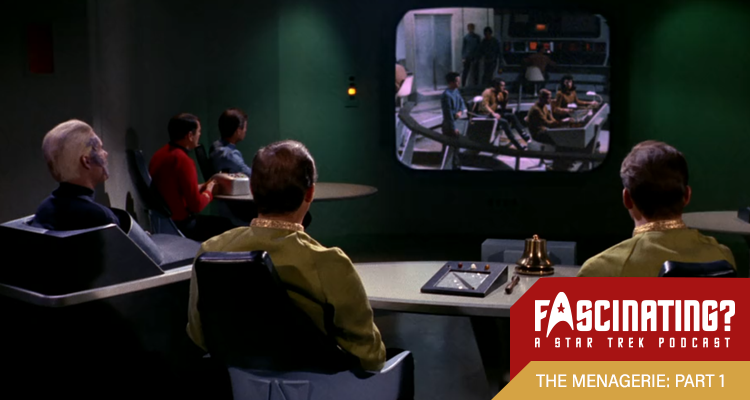 The Menagerie: Part 1 was the eleventh episode of Star Trek‘s debut season to air. In this episode Gerry and Iain ponder the motives behind Spock’s renegade actions and consider whether a promotion would make Commodore Mendez a Badmiral.


When Spock hijacks the Enterprise from Lt. Hansen (Hagan Beggs) and kidnaps his stricken former commander, Captain Christopher Pike (Sean Kenney), Kirk and Commodore José Mendez (Malachi Throne) are, in light of a report from Mendez’s assistant Piper (Julie Parrish) forced to give pursuit in one of Starbase-11’s short-range shuttlecraft.


Spock interrupts his clandestine efforts when forced to rescue the senior officers as they put themselves at risk of suffocation by exceeding the shuttle’s range. With the Commodore and the Captain aboard, a court-martial commences centering around a 13-year old mission and remarkable footage produced of its progress. When Starfleet Command identifies illicit communications, however, it seems Spock may have made a misjudgment that will carry critical consequences not just for himself, but for Kirk as well.


The Menagerie: Part 1 was directed by Marc Daniels. The episode was written by Gene Roddenberry, who rejected a story by John D.F. Black to ‘envelope’ the original pilot footage and substituted his own, leading to a Writer’s Guild dispute that Black would lose.


In this episode Gerry and Iain considered Spock’s true intentions and the frustrations of Captain Christopher Pike.


The Menagerie: Part 1 was released in 1966. It is 50 minutes long and originally aired on the NBC network. It can be viewed on CBS All Access in the United states, Netflix in the UK and is available on DVD and Blu Ray in other countries, including a comprehensive remastered set of all three seasons released by Paramount Home Entertainment.